The report, Revealing the Hidden: Indigenous Perspectives on Deforestation in the Peruvian Amazon was compiled by Peru’s national indigenous peoples’ organisation (AIDESEP) and international human rights organisation, Forest Peoples Programme (FPP) and is based on the analysis and perspectives of Peru’s indigenous leaders and organisations whose lives, lands and livelihoods are threatened by deforestation on a daily basis.

These threats became all too real for Edwin Chota and the leaders of the Ashéninka community of Saweto in Ucayali who were murdered by logging mafia in September 2014 in reprisal for their longstanding efforts to protect their lands from illegal logging and secure title to their territory. The consistent failure of the Peruvian government to provide protection to Chota in the face of death threats and legally recognise Saweto’s lands despite years of determined advocacy mirrors an experience shared by many other indigenous communities. The report shows that the applications of at least 1174indigenous communities for legal recognition of their lands remains pending, part of an estimated 20 million hectares of indigenous territories without any legal guarantee from the Peruvian government which it continues to overlap with mining, timber and oil and gas concessions and undermine with laws that violate Peru’s international human rights obligations..

As long as we don’t have land title, the loggers won’t respect our property. They threaten us. They intimidate us. And they’re armed’. Edwin Chota

Worse still, indigenous leaders who have made a stand to protect their forests have often been treated as criminals including many of the 53 defendants currently standing trial as a result of the violent incidents in Bagua in 2009 when government forces attacked indigenous peoples protesting at laws aimed at facilitating the incursion of extractive industries in their territories .

Despite these challenges, Peru’s indigenous peoples continue to successfully protect their forests and the report documents their diverse efforts to resist invasion of their lands, illegal logging and poaching and the imposition of oil and gas projects alongside initiatives to produce coffee and cocoa and practice low intensity logging in harmony with their forests.

‘It makes me furious, selling off the jungle is a business for the state, but the price is the death of our Ashéninka brothers. Despite the fact that they had been denouncing the loggers and protecting their lands the government closed its eyes and became deaf, blind and dumb. Only when they were dead did it start to take action’, Marcial Mudarra, President, CORPI- San Lorenzo.

Ignoring the real drivers of deforestation

In addition to the failure to recognise indigenous peoples as key allies in the struggle to protect forests the investigation found that official analyses of deforestation placed disproportionate responsibility on migrant farmers from the Andes. These analyses downplayed the crucial role played by decades of road construction and explicit colonisation programmes. These schemes actively promoted immigration and were aimed at the economic integration and agricultural development of the Amazon. Indeed, approximately 75% of deforestation within Peru occurs within 20km of a road.

Instead, the investigation found that the contribution of small farmers to deforestation is increasingly diminishing relative to other activities including unchecked gold mining, the clear felling of primary forests for palm oil plantations and illegal logging that remains rampant despite years of government interventions. The report estimates that in 2013 at least 20% of deforestation in Peru can be attributed to mining in Madre de Dios and palm oil developments in Loreto and Ucayali. These rates of deforestation are projected to increase massively with at least 100,000 hectares of forest in Loreto requested for oil palm development and over 50 major dams (over 100MW) planned which threatens to flood thousands of hectares of forest and displace its indigenous inhabitants.

“Despite this, oil palm is not discussed much in these debates about deforestation. It is “invisible”, just like the massive oil spills, the multiple dams that are planned, the super highways, the gold rush or the timber mafia. This explains the need for this study, the need to make visible what is not spoken and to expose what is hidden. Alberto Pizango Chota, President AIDESEP.

Many of these activities are taking place at the behest of powerful criminal organisations often associated with corruption of key government officials such as the case of a senior official at the Ministry of Energy and Mines who, in 2012, was exposed for his part ownership of a major gold exporter which sourced gold principally from Madre de Dios where approximately 97% of all mining is illegal.

‘In the La Pampa area there are 30,000 miners controlling the military commanders, the police, and the judges. The police earn miserable wages, yet now they have big houses and luxurious 4-by-4s. Officials pretend they’re intervening, but in reality they do nothing.’ Indigenous leader, COHARIYMA,Madre de Dios.

The investigation found that Peru’s government is implicated in this destruction through weak enforcement, environmental regulation and land use planning that was at best incipient as well as a series of legal loopholes and perverse incentives that promoted deforestation. These include legal provisions that encourage forest clearance in order to claim property rights while others permit the reclassification of forest land as apt for agricultural use which facilitates palm oil development in primary forests where such conversion is in theory prohibited.

On top of these failings the report identified a systematic bias in Peru’s land use planning which consistently favours large scale extractive developments, particularly oil, gas and mining projects, over and above environmental considerations and the rights of local communities and indigenous peoples as exemplified by the reduction of the Ichigkat-Mujat national Park in favour of mining interests in 2007.

Unfortunately MINAM has been created with the objective of protecting the forest but instead of this it is negotiating with these resources. Our territory and its resources have become a business to hand over to investors and capitalists. They create the protected areas…but it’s the same State that overlaps these areas with mining and oil concessions. Teobaldo Chamik Wampis leader, river Santiago.

According to government analyses, oil gas and mining activities tend to have little impact on the forest. This however is belied by the massive economic impact of such projects. In an ironic twist the Camisea gas project, often applauded for its no roads policy, has resulted in royalties of approximately US$40 million used for the construction of local roads. For indigenous peoples, who live in and depend on these forests, the impacts are typically devastating as exposed by the health and environmental disaster recently declared in the Tigre, Corrientes, Maranon and Pastaza river basins.

Despite these contradictions, Peru has taken unprecedented steps in recent years to publicly commit to protect its forests including pledges in 2010 to eliminate net deforestation to zero by 2020. In September 2014, President Humala reiterated these commitments and announced a major agreement with Germany and Norway to finance and support this vision. Nevertheless the announcement came hot on the heels of a new law (30230) passed in July to promote investment that significantly weakens Peru’s already frail environmental laws and, even more seriously could permit the seizure of indigenous lands in order to facilitate large scale development projects. As the report concludes:

“Peru now stands at a cross roads….Key measures for implementing a low deforestation path have been identified….They include the recognition of indigenous peoples’ lands and rights to determine their own development paths and the legal, financial and technical support to assist them in this process…..the closure of legal loopholes that continue to permit forest destruction, the effective control of illegal practices…the implementation of robust and independent planning mechanisms to ensure economic interests do not trump all other considerations. In conclusion, the solutions exist and the funds are available but it remains to be seen whether the political pledges to combat deforestation are reflected in the shift in attitudes and values that are required to turn these commitments on paper into a reality in the Peruvian Amazon.” 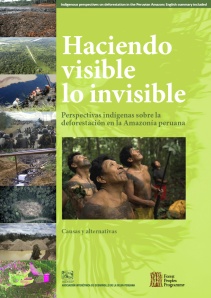 Revealing the Hidden: Indigenous perspective on deforestation in the Peruvian Amazon